Hey Guys! It’s WATF Wednesday and I thought I would share with you my epic DIY fail! Most posts out there focus on the endless beauty of a DIY project gone right. I am here to showcase that sometimes valued, good efforts, just end up as a big fat flop and go terribly wrong.

I have had a love affair with striped curtains for ages, but the price tag for these lovelies are astronomical! So, I did what any creative type does, I searched through pintrest for inspiration and read tutorials like this one: I Wanna Play Too!! {DIY Pained Striped Curtains} from Just a Girl and Her Blog. I mean if you look at her final product, it’s AMAZING! Who wouldn’t want something this lovely in their house? I was going to make this happen! 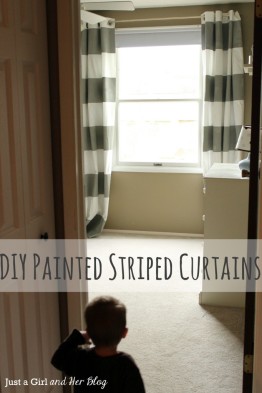 {Photo from Just a Girl and her Blog}

I went out and bought the affordable IKEA curtains, the fabric paint, the roller, the painters tape and I set off on a DIY adventure. Come along with me as I share with you all the lovely missteps of my personal DIY Striped Curtain Epic Failure adventure….

Let’s start from the beginning, just trying to lay one curtain panel out in my tiny living room proved to be a struggle. I had to measure the curtain and paint as I went because I couldn’t lay it all out at once. The cardboard boxes I used to block the paint from going through to my floors caused some issues due to the creases once they were unfolded. I would paint with my roller and the paint wouldn’t get on the fabric where the creases were.

Once the paint dried and I pulled the tape off, it was clear that it had bled. I thought OK, I guess I can deal with that and then I hung them and could see tiny spots where paint did not stick. I went back and used a brush to attempt to cover these holes, but it still didn’t work! I also accidently dripped paint on the white section as I was trying to do these touch ups. Oh and did I mention I ran out of fabric paint as I was going? I went back to the store to find out it was all sold out and had to make a special order. By the time I received the new paint, I had just succumb to the notion that this was not a DIY success for me. I had invested so much time (one curtain took me like 6 hours) and money that I just decided to throw in the towel.

I mean look at this picture? And I don’t think it’s actually showcasing the spots enough here, but oh man… Long story short, I had all good intentions, had a love for striped curtains, have a love for all things DIY, but this was just a project that wasn’t meant to be. Sometimes, DIY plans just don’t turn out as planned. But for all the epic fails I have, I would say I have like 9 seriously amazing projects work! Being creative means taking chances and putting yourself out there and sometimes you create beauty and other times, well, it just doesn’t turn out as you had envisioned it to be :)

Have you had any epic DIY fails? How did you handle it? Did you try again?

The WATF motto is “perfection is boring"! This is a lifestyle blog devoted to things that represent the perfectly imperfect.

My journey around the world

The ultimate guide for independent travellers seeking inspiration, advice and adventures beyond their wildest dreams

this heart of mine

A design blog about living a stylish life and transforming the so-so.